Waterfield was settled by Puritans. Out of Puritanism grew Congregationalism, the established religion when Winchester was incorporated, over two centuries after the first colonist built a home in the area. But almost immediately after the town was born, the Congregational Church was only one of many.

SCROLL DOWN FOR SECTIONS ON

The South Woburn Congregational Society was the first organized religious society within Winchester’s boundaries. Within its building, meetings were held that resulted in the incorporation of the new town of Winchester in 1850.

Changing philosophies accounted for some of the diversity, but so also did immigration. Having been Protestant for two centuries, many townspeople experienced misgivings when Irish and Italian newcomers introduced Catholicism into town. [Read more: No-Nothings] The immigrant Catholics tended to form their own neighborhoods and were not immediately integrated into the local society and government, something for which their young descendants who embraced Americanism strove. A 1958 study used in a Dartmouth College Sociology class stated that “overtly relations between the Catholics and Protestants have been cordial and cooperative, but differences of opinion are inevitable… Some Protestants are reported to be quite concerned about the large in-migration of Catholics and its effect on the well-regarded school system.”1 Welcomed or not, the number of Catholics grew to the point that three parish churches and two parochial schools were active in the 20th century.

A few adherents of other faiths, such as Spiritualism and Swedenborgianism, lived in the town, but, as their numbers were few, they attended meetings in other communities and their identities have been mostly lost. [Read more: A Séance at the Octagon House and Spiritualism and a Principal's Resignation]

Townspeople particularly resisted Jewish people settling in town. Nevertheless, some did. The earliest group, émigrés from Russia, was rather fluid, moving around adjacent communities. In 1976, it was reported that there were “about a hundred Jewish families in Winchester now. Fifteen years ago, Jews looking for houses in Winchester were sometimes told that the houses they were inquiring about had been sold the day before. And then those same houses would suddenly appear on the market again a couple of days later.”2 The spirit of ecumenicalism of the mid-20th century began to overcome old prejudices, but it was not until 1984 that 34 families formed Temple Shir Tikvah and opened a synagogue on Vine Street in 2000.

An ecumenical movement in the 1960s aimed to overcome religious divisions in the town. The Winchester Ministers Association, which met periodically in the 1950s, took in representatives from St. Mary’s and St. Eulalia’s in the next decade and became the Winchester Ecumenical Association in 1966. The Winchester chapter of Church Women United was founded on February 29, 1972, for the purpose of encouraging church women to join together in their community to promote peace and justice. After years of coordinating and organizing a variety of charitable events, the group disbanded in 2008.

The religious societies of Winchester had a great influence on the social, recreational, and educational life of the community. They had had extensive programs for their members, especially the youth. A number of their clubs and groups have provided service not only to their own members but also to the community.

Several of Winchester’s churches have written their own histories. It is not the intent to duplicate this effort below but simply to provide historical, geographical, and architectural background in the chronological order in which the churches were built. 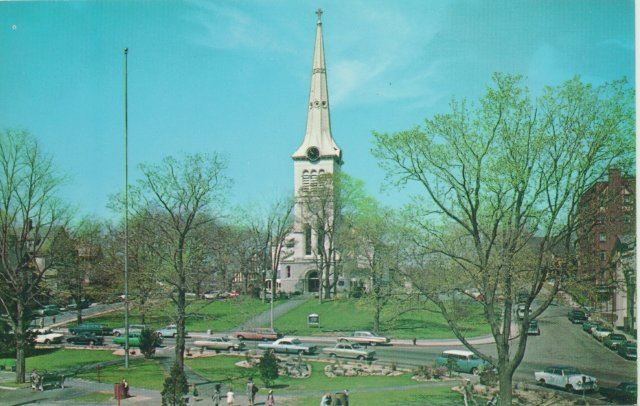 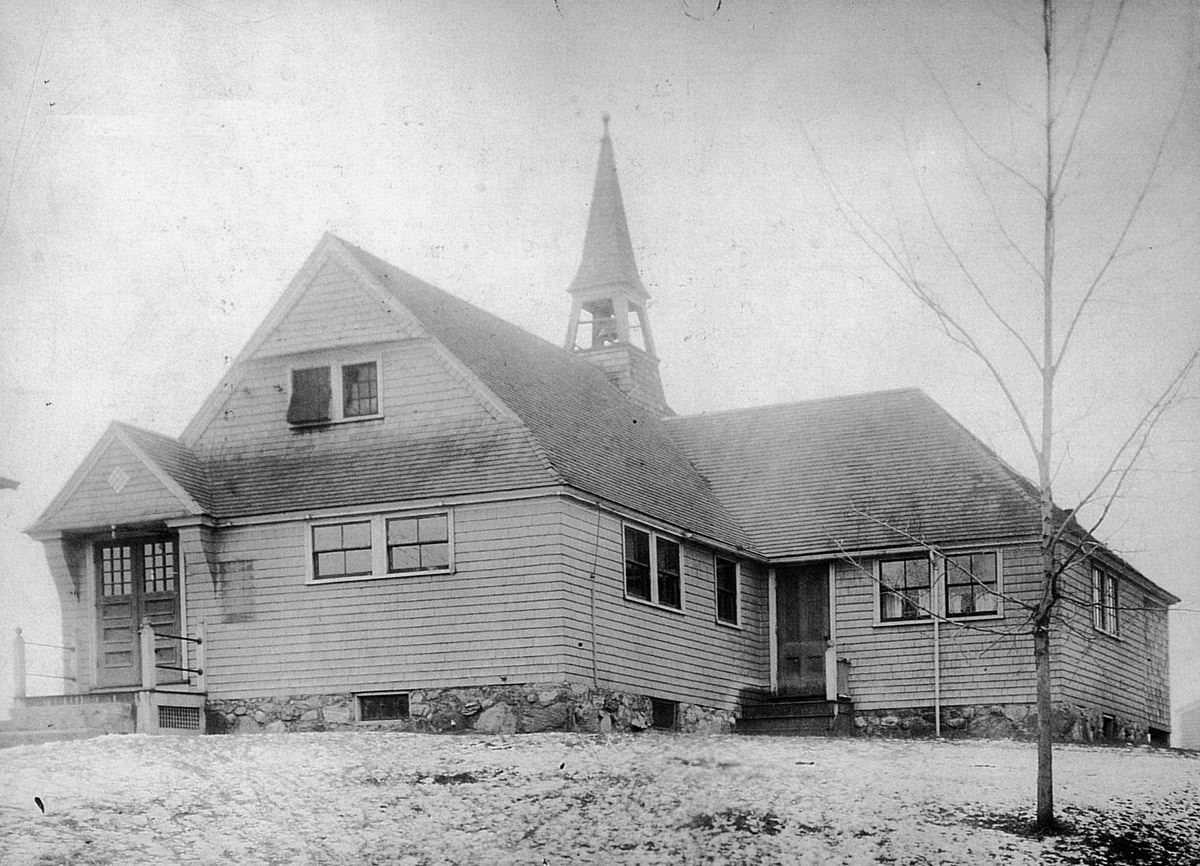 The Second Congregational Church was organized in 1906, having grown out of the Bethany Chapel and Sunday school which served the people of the Highlands. After meeting in one another’s homes and the waiting room of the Cross Street railroad station, a building for the Highland Bethany Society was built next to the Washington School on Cross Street. Originally non-sectarian, in 1906 the Society was organized into the Second Congregational Church. In 1926, the members moved into a new stone building at the corner of Washington Street and Kenwin Road. 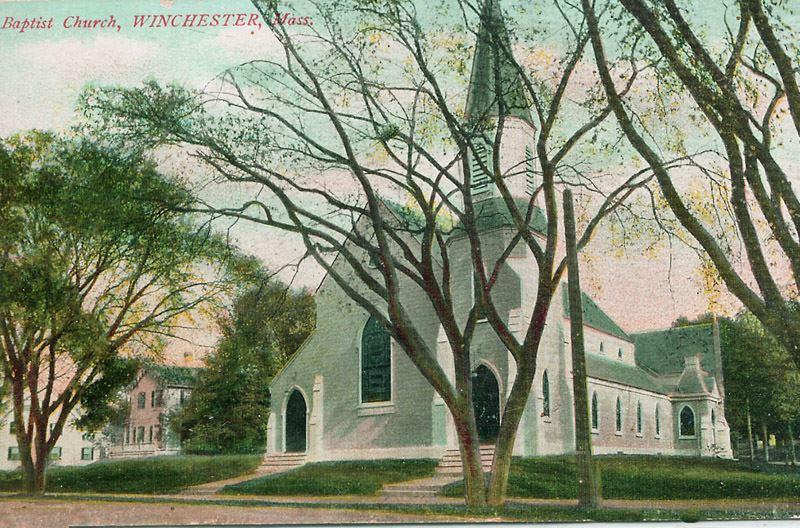 When the town was incorporated, Baptists were holding public worship meetings, and a Society was organized on Aug. 18, 1852. They dedicated a building on the corner of Washington and Mt. Vernon Streets on June 9, 1864. It was replaced by a larger structure designed by George F. Newton in 1928. 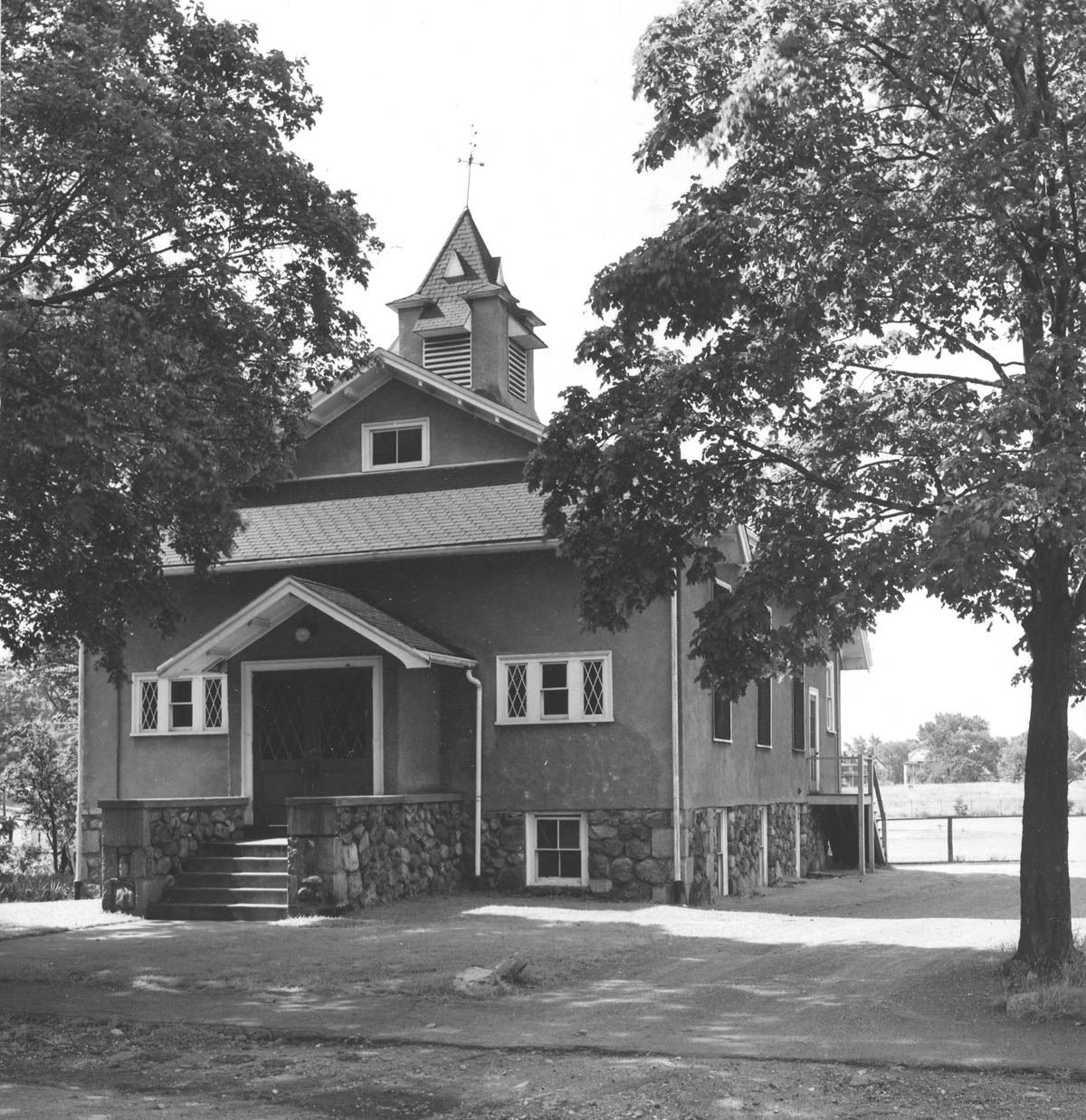 The Second Baptist Church, which also went by the name New Hope Baptist Church, began with services held for the African-American community in the 1890s. In 1896, the meetings were recognized as a mission of the Baptist Church. It used the old Washington School building on Cross Street, which it bought in 1920 and remodeled. By 1975, the church had not been used for years and was offered for sale. In 1980, it was purchased and converted into a residence. 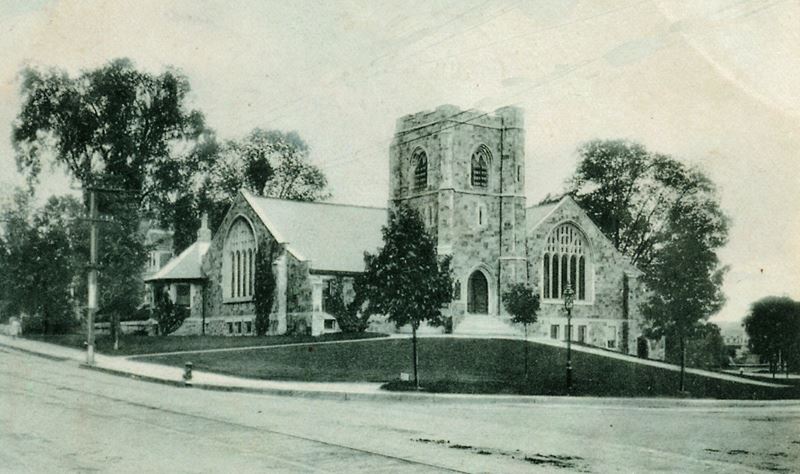 The Unitarian Society began with a Sunday school organized in 1855 and occasional preaching services. In November 1865, articles of organization were drawn up. The first Unitarian church building was dedicated on March 17, 1870. After a fire on Nov. 16, 1897, the Society built a new church designed by George F. Newton at the intersection of Main Street and Mystic Valley Parkway, dedicated on April 27, 1899.  [Read more: Unitarian fire] 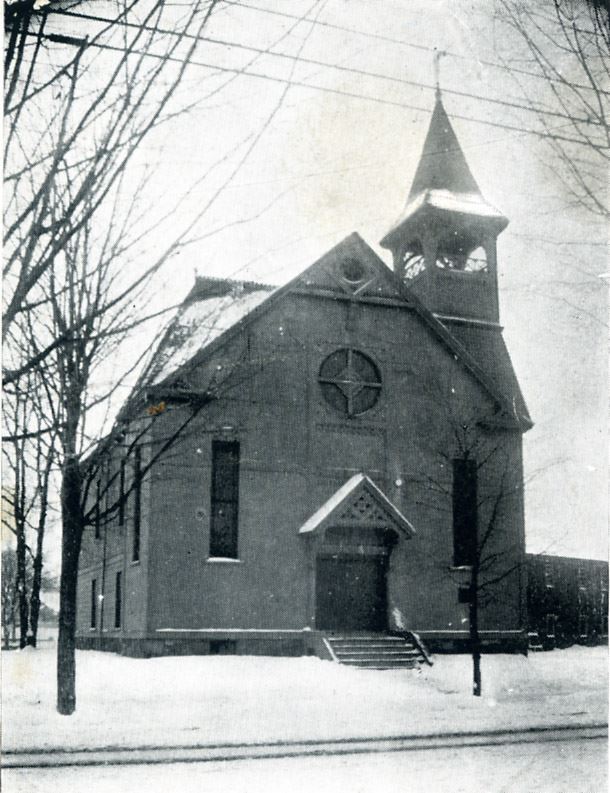 Methodists began holding meetings in Winchester in 1871. On Feb. 21, 1872, the Methodist Episcopal Society was organized. It raised its first building at the corner of Mt. Vernon Street and Converse Place and dedicated it on June 1, 1876. 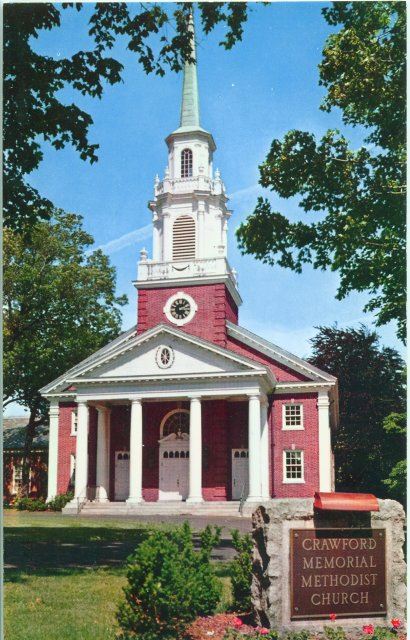 Its second building, erected at the intersection of Church and Dix Streets, was dedicated on October 10, 1926. It was named for Winnifred Crawford, wife of Frank Crawford, who purchased the land and raised funds to build the new church. The old building was acquired by the Winchester Laundries and used for their offices and a community recreation center from 1936 to 1943. It was demolished in 1958. 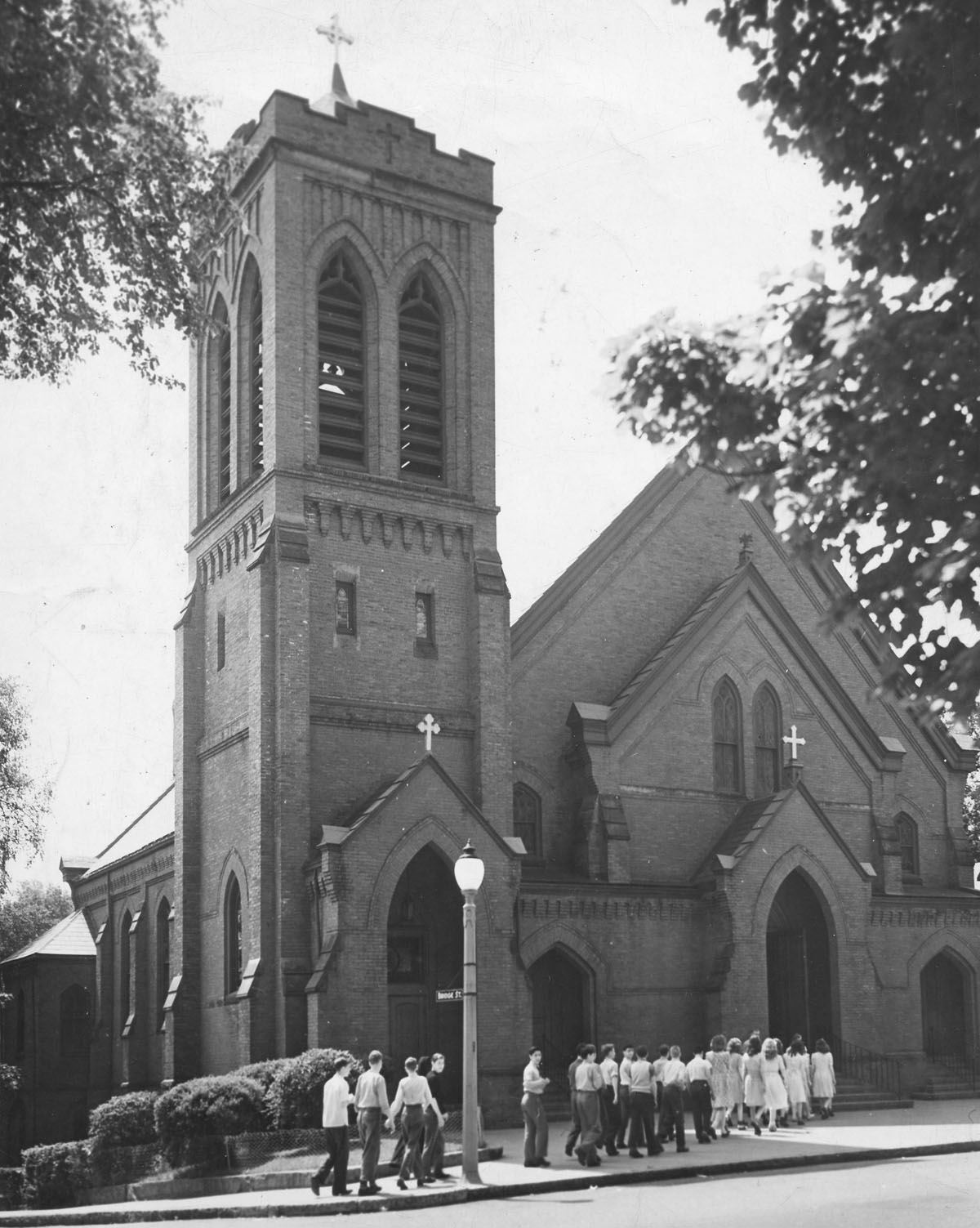 Roman Catholics originally attended church in Woburn. After a small frame chapel was built, mass was celebrated in Winchester for the first time on Dec. 25, 1875. In 1876 the parish of St. Mary’s was constituted. During the tenure of the second pastor (1882-1889), a new building was built. Under the fourth pastor, who arrived in 1893, the wooden structure was enlarged and encased in brick during 1896-1897. The architect was Patrick W. Ford. 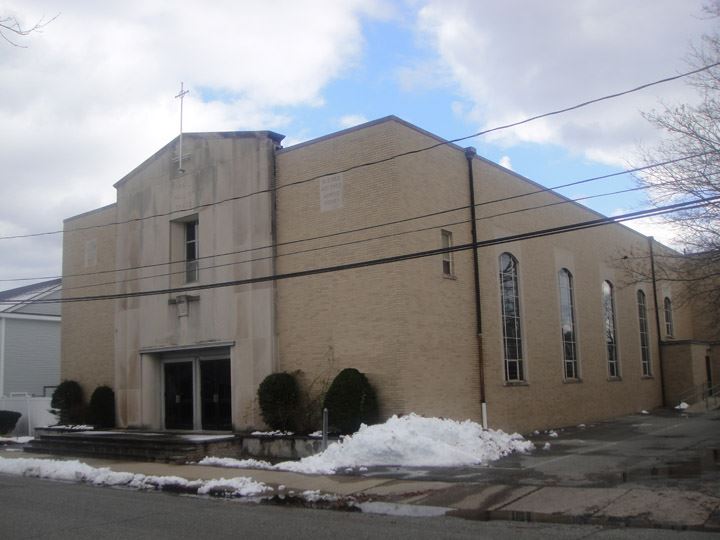 St. Eulalia’s on Ridge Street, whose parish extends also into Arlington, opened in 1966. Their building was designed by Boston architect John P. Heffernan.

EPISCOPALIAN - PARISH OF THE EPIPHANY 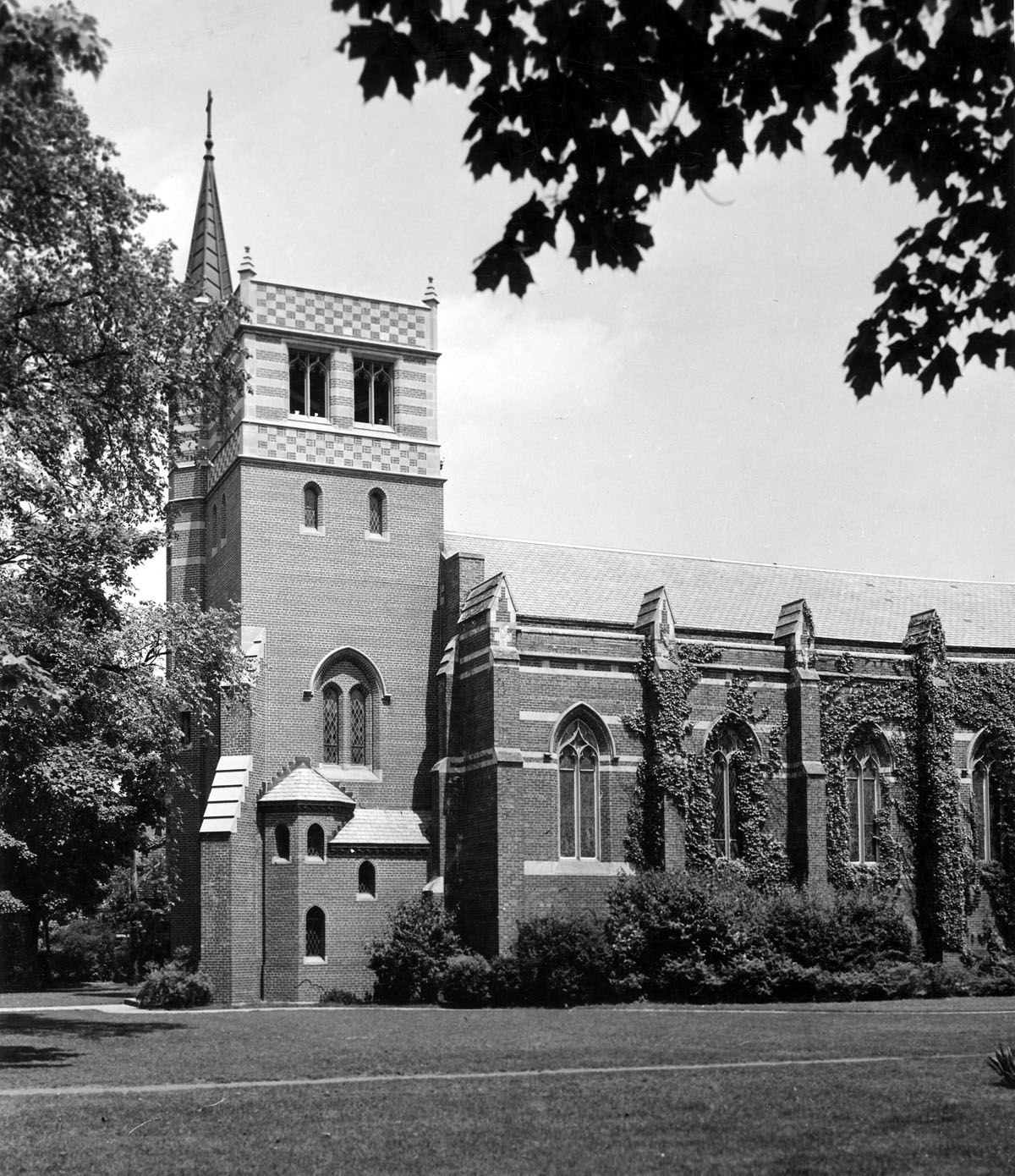 While home meetings of Episcopalians may have begun about 1862, the first public service occurred in 1882. The group built a church building on a piece of land on Mt. Vernon Street offered by David N. Skillings Jr. January 25, 1885 was the date of the first service. The parish moved into a new building on Church Street which opened on Oct. 8, 1905. The new building was designed by Winchester resident F. Patterson Smith of the firm Warren & Smith. The old building was used by the Handicraft Society until rented by the Christian Scientists. [See also: Winchester Handicraft Society] 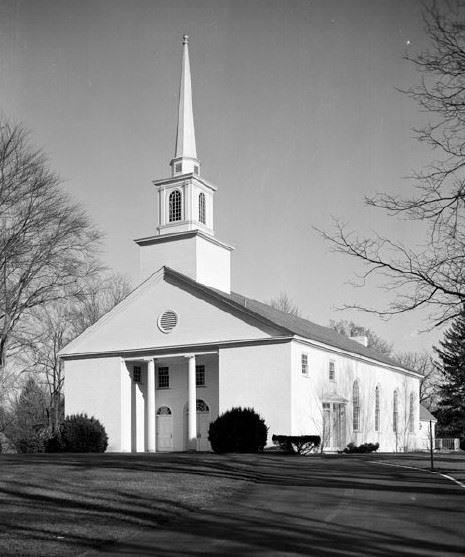 The First Church of Christ Scientist, Winchester, organized in 1900, meeting in Town Hall. In 1907, members purchased and began meeting in the former Episcopal Church on Mt. Vernon Street, to which they added a Sunday school room in 1928. Needing larger quarters, they bought land on Church Street and built a new church building, designed by Royal Barry Wills, which opened on Oct. 19, 1958. The old building was purchased by the Knights of Columbus who demolished the Arts & Crafts building in 1976 to replace it with a larger brick structure. That building is now the home of the Hope Christian Church.

Not to be confused with the New Hope Baptist Church formerly on Cross Street, the Hope Christian Church on Mt. Vernon Street is a community of evangelical Christians who meet in Winchester. The group formed in 1993 and met for a while in the Lynch School until purchasing the Knights of Columbus building in August 1997. Their building was built on the site of the first Episcopal Church, demolished by the Knights of Columbus to make room for the existing brick building.

Temple Shir Tikvah was organized in 1985, and the temple dedicated the first synagogue in town in 2000. The building was originally a private residence on Main Street. The first meeting of Unitarians which led to the formation of the Winchester Unitarian Society was held in the parlor on Nov. 19, 1865. Moved to Vine Street, it continued to be used as a home, then the headquarters successively of the Knights of Columbus, Odd Fellows, and American Legion, and then again as a residential building before being remodeled as a synagogue. [Read more: Temple Shir Tikvah]